Meeting RC8 board: Riding behind has never been better

Any motorcyclist, who has once participated in a meeting of like-minded people, appreciates the pleasant ambiance and feeling. It is even more special, when it’s a meeting of certain models instead of a brand meeting or a meeting on the occasion of a particular event. That´s exactly what took place in Germany at the beginning of August, a meeting of the German KTM RC8 board. 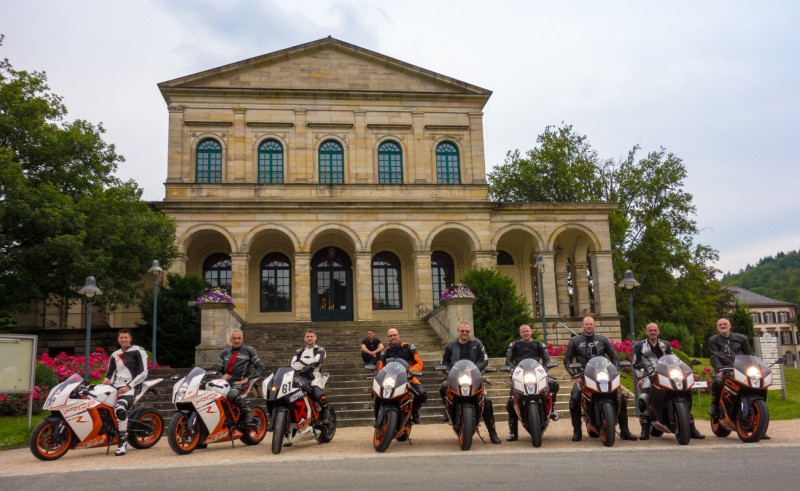 The RC8 board´s admin Norbert Thiede, who can thoroughly be called orange-drugged, convened a meeting of RC8 riders in the small community Motten in the Rhoen Mountains, uplands in the border area of the German federal states Hesse, Thuringia and Bavaria. Finally, a small but fine group met in the inn “Zur grünen Au [At the green meadow]” – overall twelve KTM enthusiasts with nine RC8 Rs, a SUPER DUKE R, an 1190 ADVENTURE and a 690 DUKE. Another RC8 was prevented, since it preferred to be at the dealer´s workshop. However, the owner wasn´t deterred – without hesitation he swooped for his second bike, a 690 DUKE.

The RC8 R is KTM´s sporty Superbike and easy to recognize by its classic-adorable design. The 1190 two-cylinder thrills with strong power and endless torque, what makes comfortable sporty riding very easy. The slim twin silhouette and the superb handling are completed by perfect front wheel feeling. In short: those who like Superbikes and search for the ultimate thrill regarding individuality and pure riding pleasure, should definitively have a test ride on the RC8. 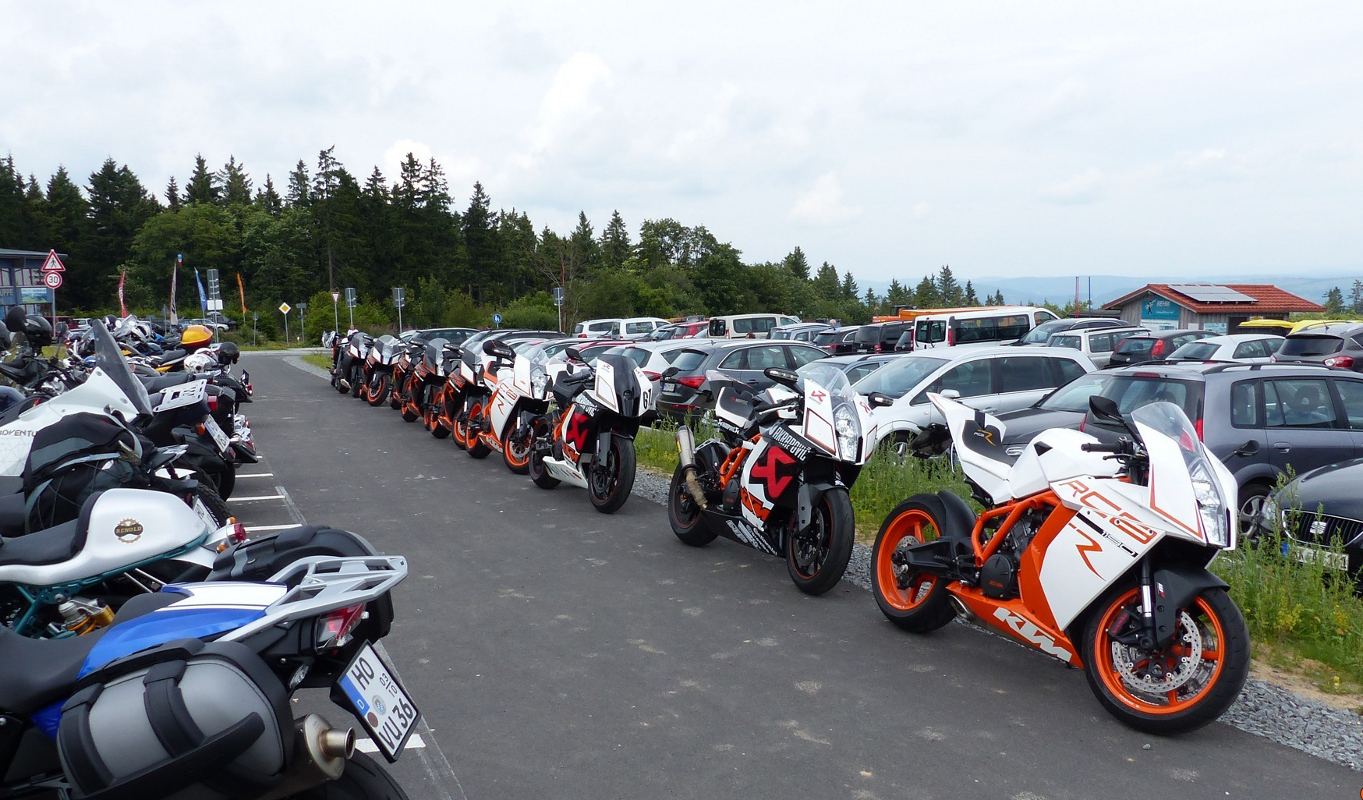 RC8 Superbikes are still exotic to look at in daily life, even better to see all the RC8 lovers arriving step-by-step in order to have a ride together and chat about the RC8 and swap ideas on many other orange things. The evening´s get together concluded slowly; the waitress already wanted to clock off, but some of the RC8 riders proved astonishing endurance.

On Saturday, the group discovered the curvy area of the Vogelsberg and Rhoen. The positions in the bunch were changed quite often. It´s always amazing to see six, seven or even eight RC8 bikes riding together. With the fantastic rear view and superb twin sound, it has never been a better feeling to ride behind. 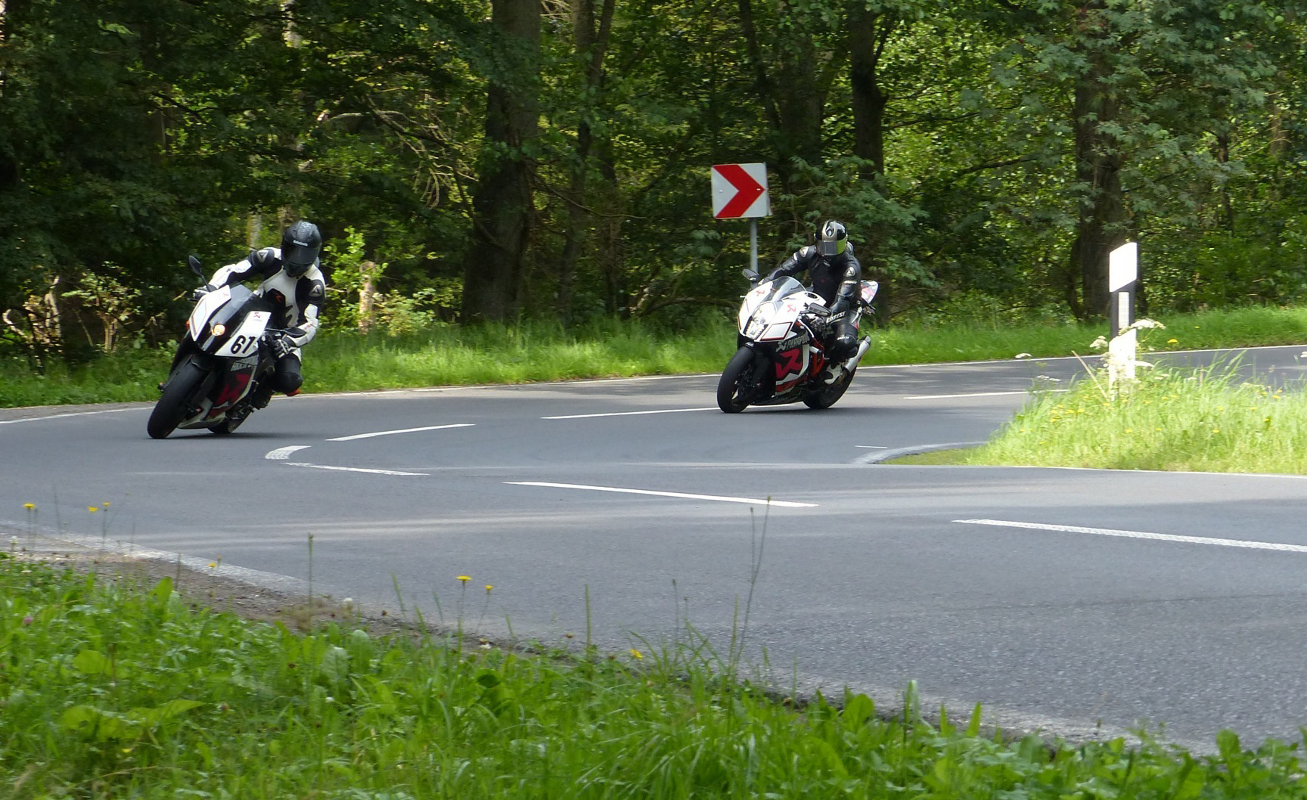 From Motten the group went to the Vogelsberg. Via Bad Brückenau, where a perfect location was found for a group picture, they went on to the Kreuzberg. At this rather touristic venue, the visitors were pretty surprised when the two-cylinder bunch arrived. After lunch, they moved on to the “Wasserkuppe [water peak]”, a lookout on the highest Rhoen mountain with hang-gliding and flight training schools.

After a short break, the group went on to the Hausen hillclimb race track and the Rhoen elevated highway. There they could turn the throttle lever before the RC8 group returned to Motten. The evening was much characterized by eating and drinking and recalling the day´s trip. Everybody was happy about how the riding skills of the group fit together – certainly not self-evident. 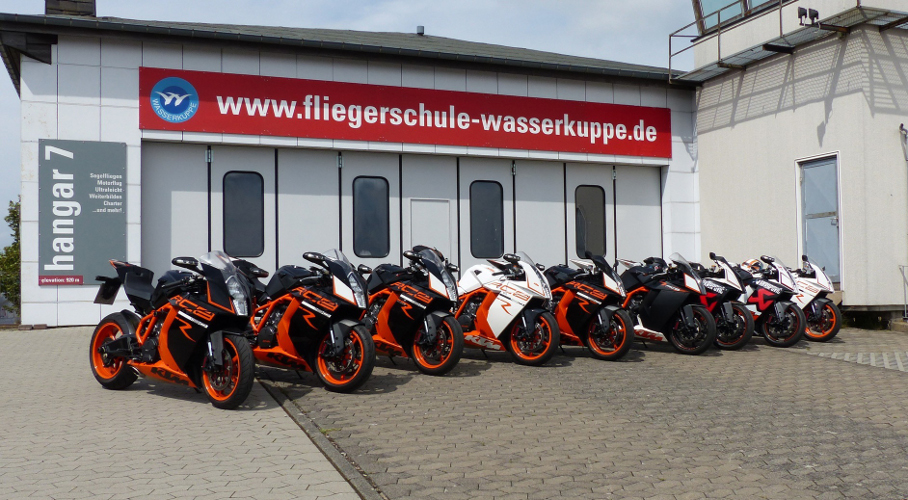 In the morning, some of the group look pretty tired, but while having breakfast they already started to make plans for next year´s meeting. Pretty sure that there will be a RC8 board meeting in 2015.