More smiles per mile! I take my helmet off and sit by the side of the bike after a long day in the saddle. I’m sweating. My heart is racing. I’d smoke if I did. Somebody hand me a beer …

KTM BLOG has just spent the day riding the RC 390 on road and track. The size of the smile it has created all day far outweighs what a bike with a modest 375cc single cylinder engine should deliver. How did it manage that? Let’s rewind to this morning… 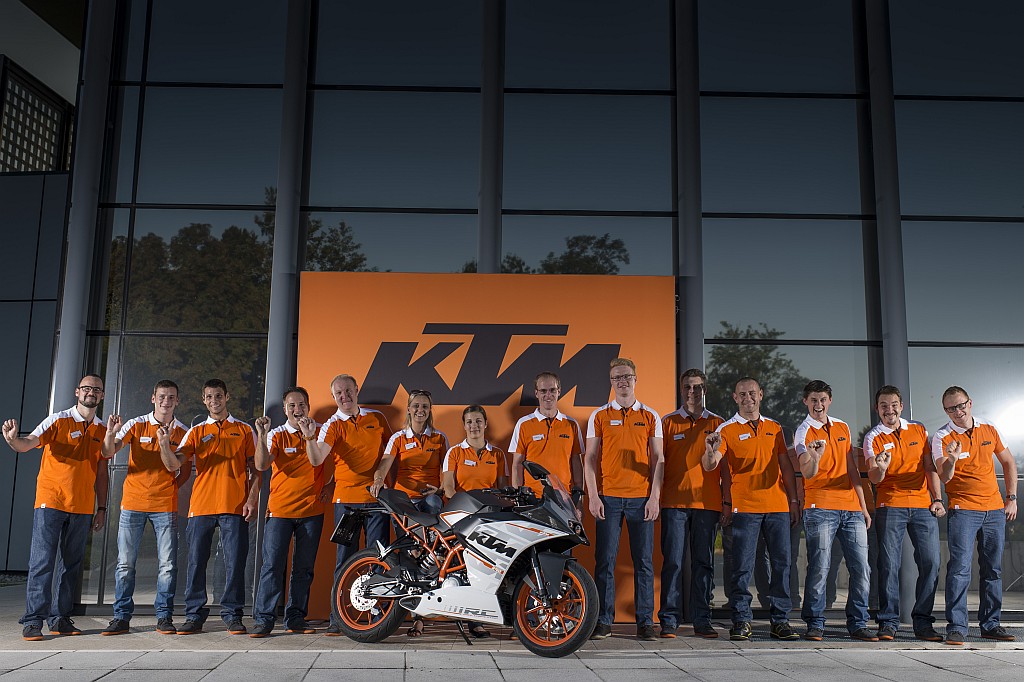 The Duke’s new clothes?
In the conference room of the Una Hotel in Modena, Italy, for the morning press briefing at the RC 390 launch, KTM PR man, Thomas Kuttruf, has just interrupted the RC’s project manager, Diego Arioli, for the third time.

While Diego was detailing the technical attributes of the eagerly awaited, fully-faired machine that is encircled by the assembled cast of international journalists, Mr Kuttruf is keen to stress that the RC is a lot more than merely a 390 DUKE in full sports dress and that its a very important model in its own right. Indeed. Ever since the RC 390 was shown for the first time at the EICMA Show in November 2013, the world has been waiting for it – including me.

The introduction of the 390 DUKE – the first KTM to be sold in all of its global markets – in 2013 proved that the punchy single cylinder engine had scope for further ways to offer big riding thrills for riders of all experience, despite its relatively small capacity.

Maybe KTM could have saved themselves a whole load of work and slapped a fairing on the DUKE and some clip-ons; that still would have made a mega bike. But the RC is more. It had a dedicated design and development team and an exhaustive testing schedule that it went through to get it to the finalised machine. In short, no corners were cut in making this bike. 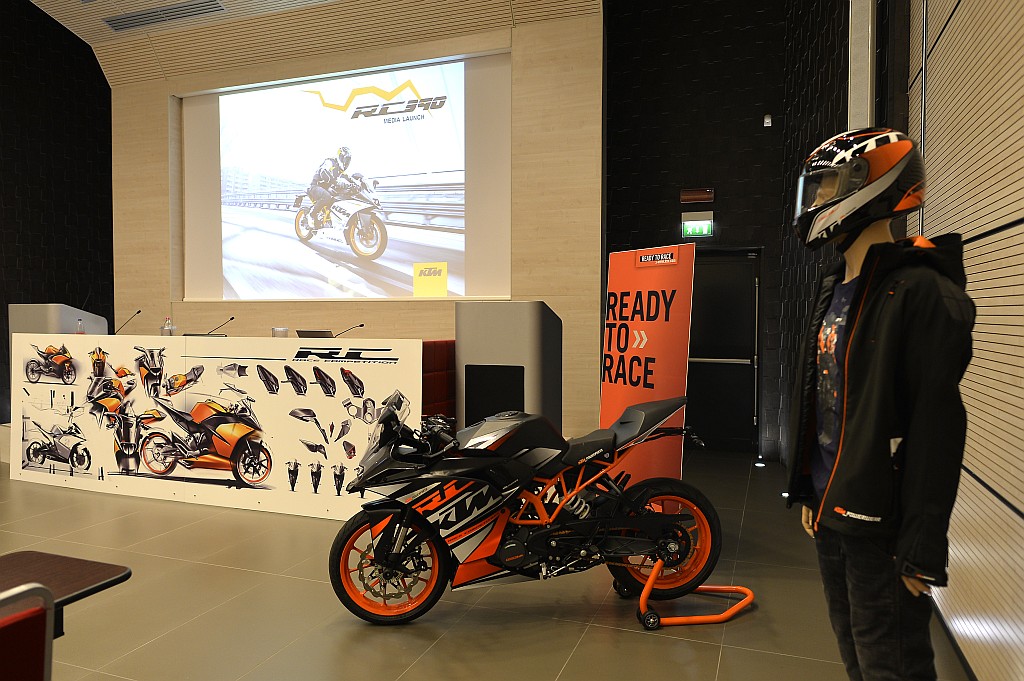 Power and control
Well, saying that some of the work was already done. The RC’s engine is exactly that from the DUKE; the block, gearing, exhaust, cooling system – all the same. Nothing wrong with it either; 44hp and 35Nm of torque. But a sports bike needs a chassis to match its intentions and that’s what KTM gave it.

Sure, the RC’s orange steel tubular trellis frame looks just the same as the DUKE’s orange steel tubular trellis frame, but the sports bike gets a steeper steering angle, reduced trail and shorter wheelbase. The weight bias of the bike – with and without the rider – also places more emphasis on the front end, compared with its naked counterpart, helped with the wide-set clip-ons.

The WP Suspension front and back is also altered; with 25mm reduced travel on the front matched to firmer damping and springs both ends. Despite the compact chassis, ground clearance has been increased – perfect when slamming the RC on the side of those fat tyres, mounted on familiar orange cast wheels. 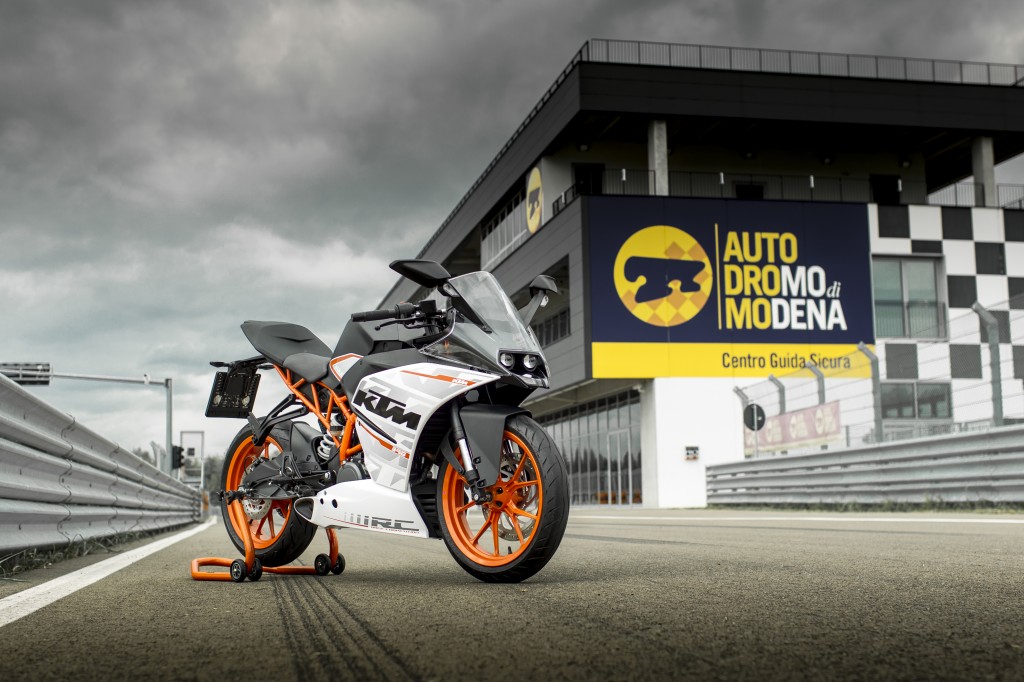 A race bike on the road
But the styling alone shows us just how much effort has gone into this bike. The back of the conference room in flanked with a large board that shows Kiska design sketches of how the RC evolved – and each one starts with something that looks like a pure race machine.

Diego’s eyes light up: “Every effort was made to disguise the appearance of the street legal components of the RC to make it look like a true race bike on the road.” He continues, “The twin halogen headlights are recessed to be semi-hidden, the front indicators built into the mirror stems, the licence plate hanger is as slight as it can be and the patented, underslung exhaust is flush fitted into the bellypan. Perhaps the best feature is the pillion seat that looks just like a single seat race unit. Sure, we could have saved a load of work and made an optional PowerPart pillion seat cover, but this would have gone against the spirit of the bike.”

The ‘rivals’
But the RC 390 is facing some stiff competition and KTM identifies its opponents as Honda’s CBR300R and 500R, Kawasaki’s Ninja 300R and the impending Yamaha R25.

But the orange brand isn’t worried, Diego tells us: “We’ve built a bike that is right on the limit for the A2 licence class in terms of maximum power and the power to weight ratio. Not to mention details like upside down forks, ABS as standard, a multi-function digital display and LED lights.” A very compelling case indeed. 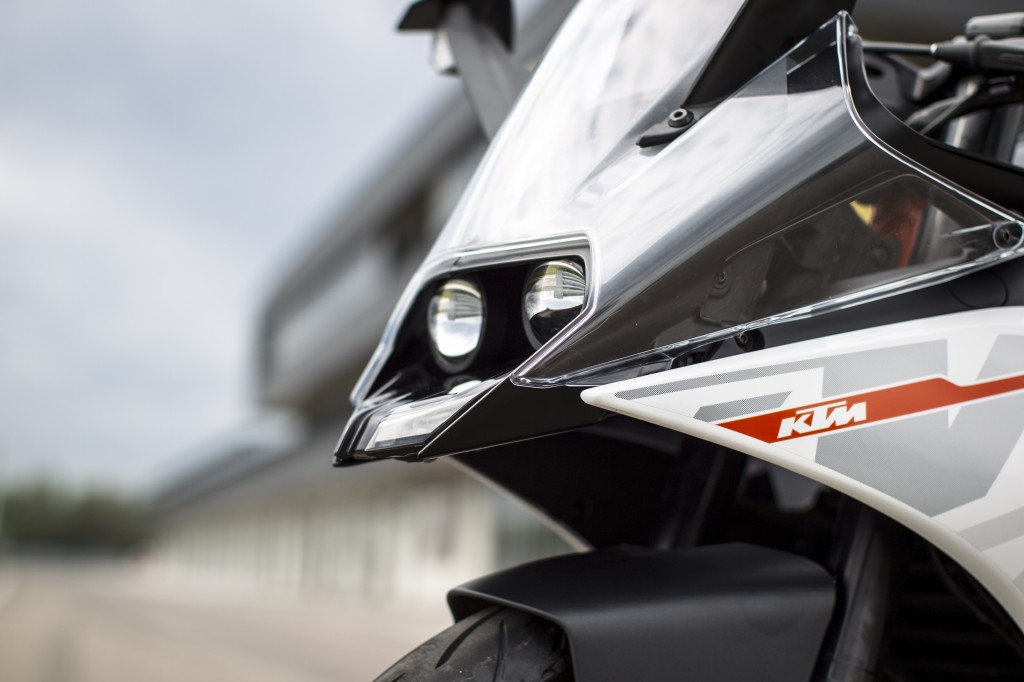 Let’s ride!
Time for riding and the road ride loops from Modena up to its surrounding hills and circles past Ferrari’s Maranello home. The route takes on a mixture of twisting switchbacks of descents and accents; some with smooth surfaces and ones that have been ravaged by traffic, winter and artillery fire by the looks of them. We also ride through a city and many busy towns and villages. Not the idyllic sun-lit roads all riders dream of, but a mixture of what the RC is made to tackle for the daily commute and stolen weekend back road blasts.

Passing a battered Fiat round the outside as it slowly meanders up a technical tarmac ribbon or carving between tiresome town traffic – the RC 390 proves its agility on the road on many occasions of the test route. It steers a lot faster than the DUKE, but also not so fast that you feel out of control – there’s plenty of feel and stability.

On one particularly twisty section, the engine’s versatility could be exploited by holding the bike in third gear; the motor pulling cleanly from low revs and singing to the redline. The engine braking meant that the brakes could be left alone with maximum concentration on getting the lines right. Like riding a scooter, only a million times more fun!

The clip-ons are comfortable and don’t give the usual ‘head down, bottom in the air’ riding position and the bike has plenty of room to move around – perfect for taller riders. This is a comfortable sports bike and the super narrow; allowing riders to get tucked in for maximum speed. Which, of course, we never did 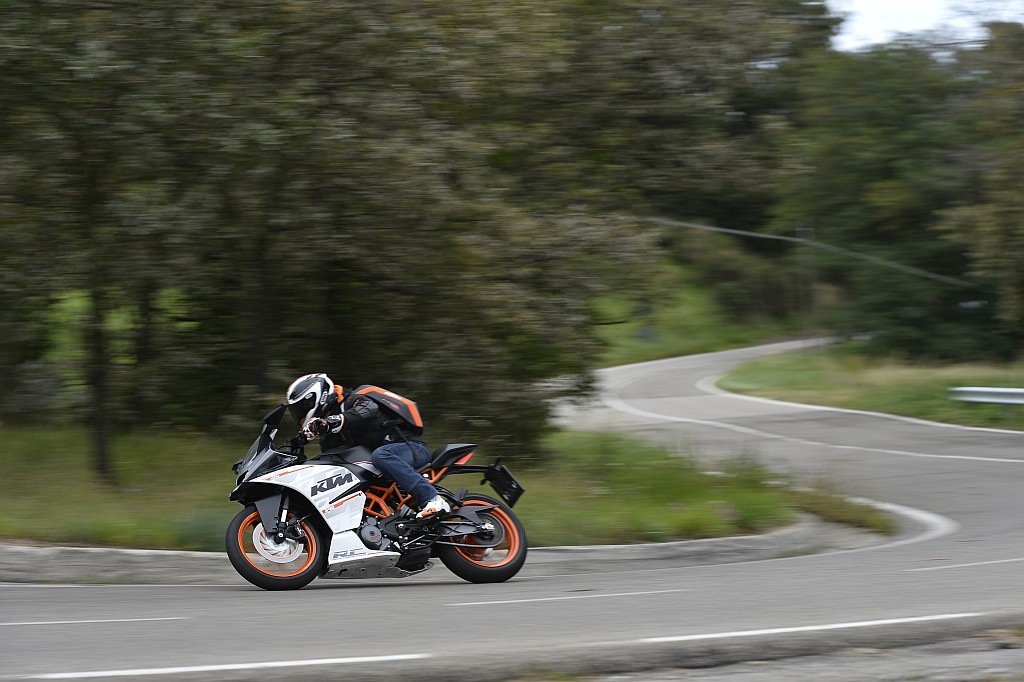 Ready to Race
Three sessions at the tight, twisty and technical Autodromo di Modena after lunch meant that only the required nourishment was taking onboard to keep power-to-weight levels high.

On the circuit we were able to exploit the agile handling further. And further. Until the bellypan, footpegs and gear lever scraped the grippy circuit. Knee sliders didn’t get much of a break and finished the sessions as hot as the tyres.

The RC 390’s power is more than enough to excite, but on a dry, hot track it requires no modulation of the throttle – 0-100% in one fist full. The real fun comes from sustaining speeds in the corners and braking far later than you’d ever imagine – even when compared with a large capacity sports bike boasting another disc and caliper. 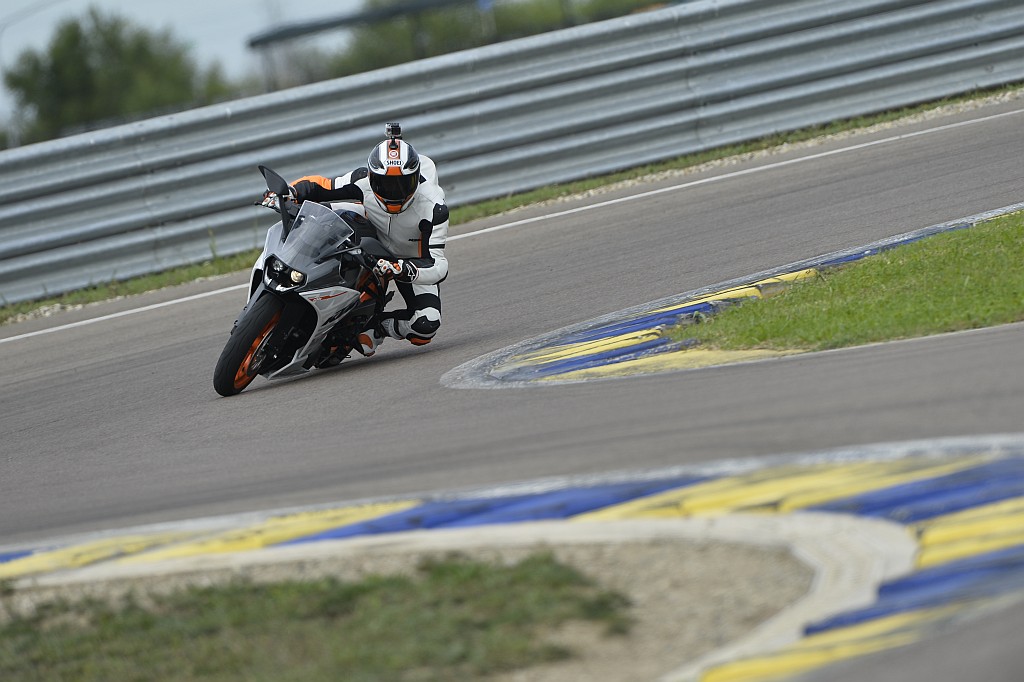 Much like it had done on the road ride, large sections of the circuit allowed the use of one gear to showcase the flexibility of the engine, allowing one thing less to think when getting to learn a circuit with tricky, tightening radius corners.

Sure, some of our fellow riders crashed because the RC’s chassis gave them the confidence to push past the limit. Honestly, pick the right circuit and you’ll have more fun on an RC 390 than you would a 1000cc. Best of all, tyres and fuel would last longer.

The ride back to the hotel from the circuit was no less exciting than the sessions on the track and that seems to be the RC 390’s trick; create a thrilling riding experience no matter how dull the journey should be.